Hazz said:
That would have been ideal, bet they suck like a cheap hooker
Click to expand...

I would assume as such. Not that I would have any knowledge or experience of the latter sentiment............

Went to pick up my door sills and spoiler from the paint shop earlier. The painter dropped my spoiler on the floor as he got it off the rack… so I came home with my sills. He said “come back on Tuesday, fuck sake”.

I guess the positive is they’re a bloody good paint match and I now have something extra to do this weekend. I also plan on relocating the radiator overflow and fitting another rocking horse turd of a part - an OEM airbox bracket which I bagged earlier this week. It’s currently championship white, I considered getting spoiler man to paint it but meh, a dusting with a black spray can will do I think.

2 more weeks and I’m going to put it back on the road and start enjoying it. Gonna swap it over with the mini at grinspeed at some point for a thorough check over and fluid replacement. Apparently the brakes actually work on the thing now, joy of joys!
Last edited: Mar 4, 2022 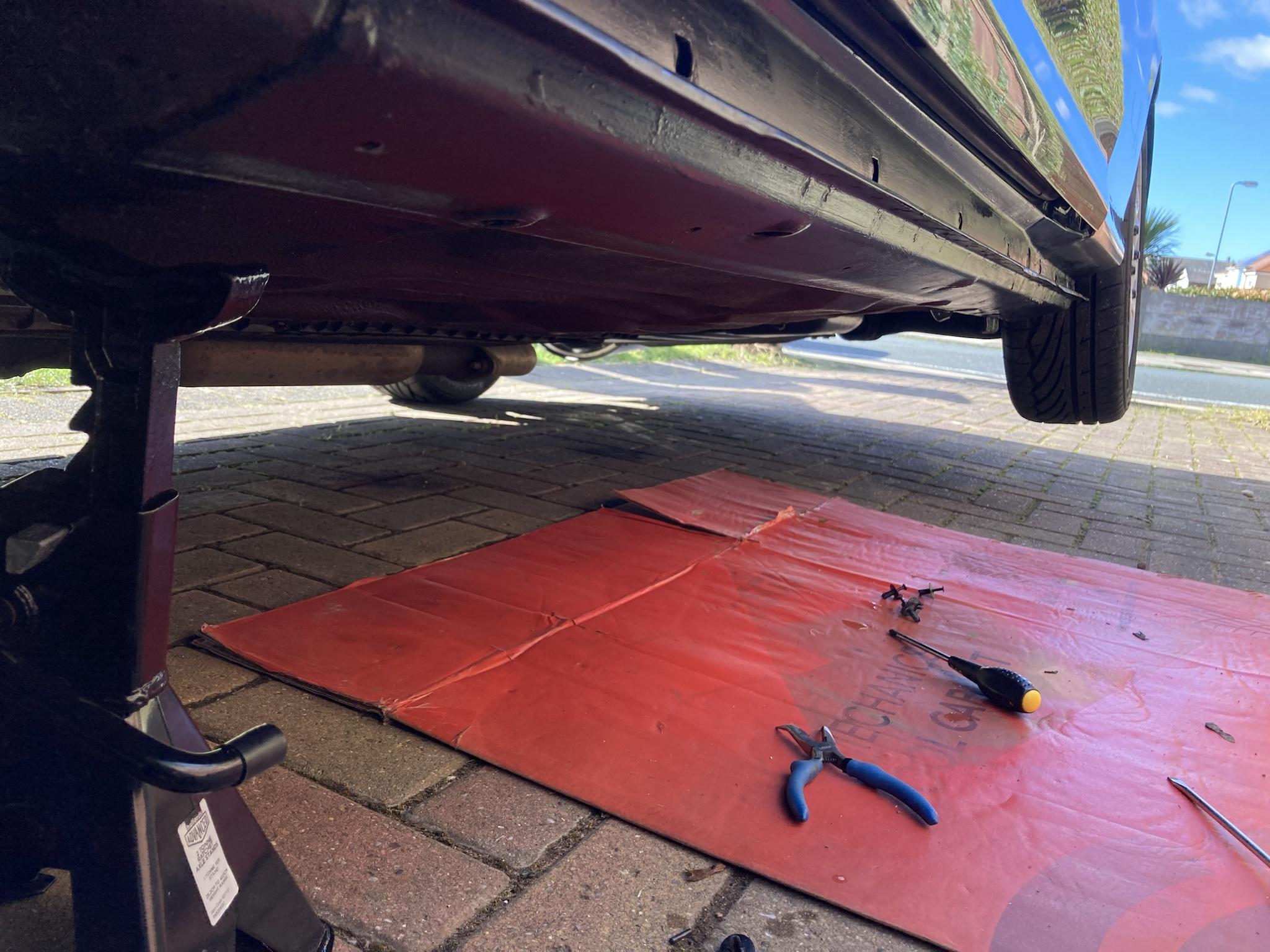 Great work on this dude. Love a DC2. I would paint that red H on the steering wheel!

Cheers dude, it’s getting there… slowly!
Yea, I think I’m leaning that way on the steering wheel red H too. I’ll nip into a model shop at the weekend for some paint and a tiny brush I think. Or maybe a spray paint would be a nicer finish if I masked it up neatly… Hmmm 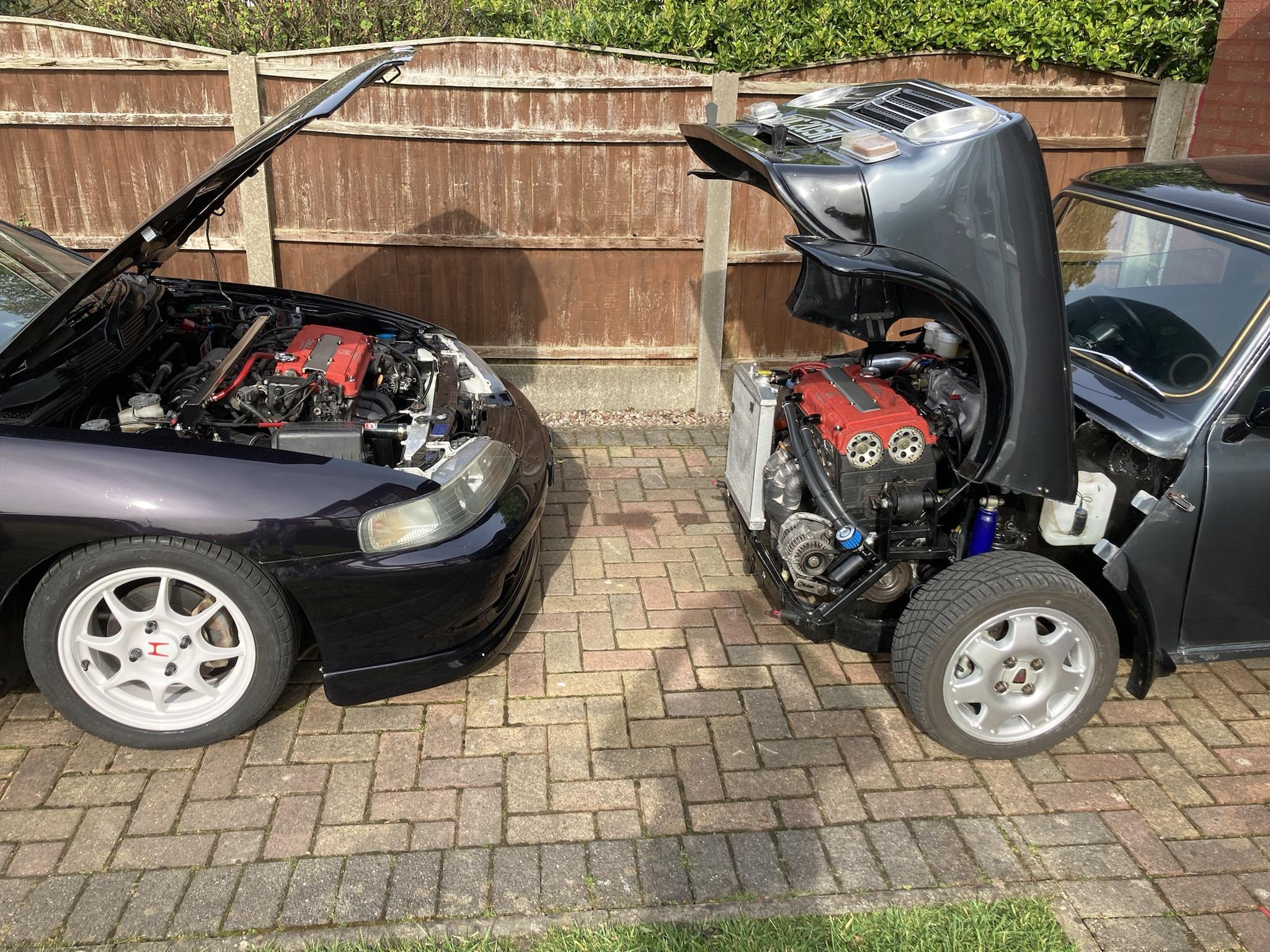 Took it to Honda in Southport yesterday to pick up some oem wheel nuts. The lovely blonde at reception ran out, I thought she was gonna tell me to move the car but nope. She went to get all the mechanics to come and have a look. Bonus was I walked away with a fresh set of wheel nuts FOC. Thanks to the mechanic who sorted me out
Turned out to be quite a fortunate day. I’d spotted a nail in the passenger rear, took that to get repaired. It was too close to the edge sadly, but we pulled out the offending item and it turned out to be about 5mm long and in at an angle, so no terminal damage.

Also, having now driven it a bit with a sensible exhaust on, I think I may require some new wheel bearings. Oh and as I had expected, I also need some OEM length wheel studs in order to fit standard nuts. Just need to figure out which is the correct length now.
Booked in with Stevie next Thursday for a fluid refresh and a general check over.

edit: turns out the bearings are pretty sketchy to replace on the ‘96 rear hub, so I’ve purchased 2 brand spanker entire hubs and whilst I was at it, 2 new CV joints with boots. So that’s half the wheel studs sorted at least…. Eating into my profits a bit here if I sell it but I want this to be the nicest I can possibly make it.

speaking of which… the headlights. They’re corroded inside of the indicators… new set of lights? No chance, well over £2k. A nice set of 2nd hand ones are £1800. So I’m going to attempt to split them apart and refurb them with chrome spray paint, I’ve used it before at work and it’s pretty fucking good. It’ll be a puckering experience to split them though.
Last edited: Mar 17, 2022

Insane. Couldn’t quite believe what I was reading. I’ve got a set of 98 spec lights too, so I guess that just upped the value of the car by 1k haha

there’s a battered 96 spec passenger light for £350, that’s the cheapest I can find but it’s in worse nic than the ones I have.

if Anyone is looking at buying a DC2, maybe consider a UK spec car. Parts are much more plentiful and a lot cheaper.

going with a good friend, he’s just bought an IS250 for the trip for £1700. Looks like it’s been in as many front and rear smashes as Riley Reid. Should be a laugh anyway.

Hazz said:
Looks like it’s been in as many front and rear smashes as Riley Reid
Click to expand...

Arrived back with car safely. Pics and stories to come, I’m too wiped out after what just transpired over the last week. Let’s just say, history repeats itself. Oil cap. A-top a mountain.

I'm definitely ready for this story

I’ve been putting this off in anticipation of the diagnosis… it’s currently with Stevie at grinspeed.

I’ll start by saying this was a very poorly planned trip whilst extremely drunk with my mate. We did the trip effectively backwards and did not account in any way for the road conditions whilst looking at mileage. One day we did 179 miles at an average speed of 26mph, for instance.

I had planned on raising my car up for the trip, knowing it struggles to get over anything but the mildest of speed bumps without a scrape. Spanner didn’t arrive in time (spanner STILL hasn’t arrived). Sort your shit out Meister R. That turned out to be a huge mistake. There’s a lot of integra on the roads in Scotland. Mostly exhaust manifold/b pipe and oil cap.

So yes. I am a retard as you all well know. No other member has driven their car into their garage with the door closed to my knowledge. Well, I’m not proud to admit I did something almost worse. Somewhere near to fort William (I’ll update this with pics soon) I decided it was a good time to check my oil. I chose well, it was right at the min level, maybe a smidge under. Topped it up. All good. Carried on for around 30 miles, picked up a hitch hiker around mile 2. Dropped him off around mile 28 and then stopped for a nice view. This is the point I noticed the oil pouring from the front grille. I knew instantly what I’d done. We were in the middle of fucking nowhere and I’d left my oil cap off. We we’re staying in Irvine that night for the last night of the trip, a good long drive away. It was Friday, 5:20pm. I called Glasgow Honda and ordered an oil cap, in the next morning.

we left the integra there atop a mountain in a lay-by. Drove to Glasgow the next morning for 8:30am, then to Halfords for some more oil (I only brought 1ltr) and back to Glencoe… palms sweaty the whole way not knowing if this oil cap would fit or not (it was from a 1.8 k-series). Got there for around 11.30am, then had to drive back to Southport from there. I’ll show the Google from that day, it’s mental. 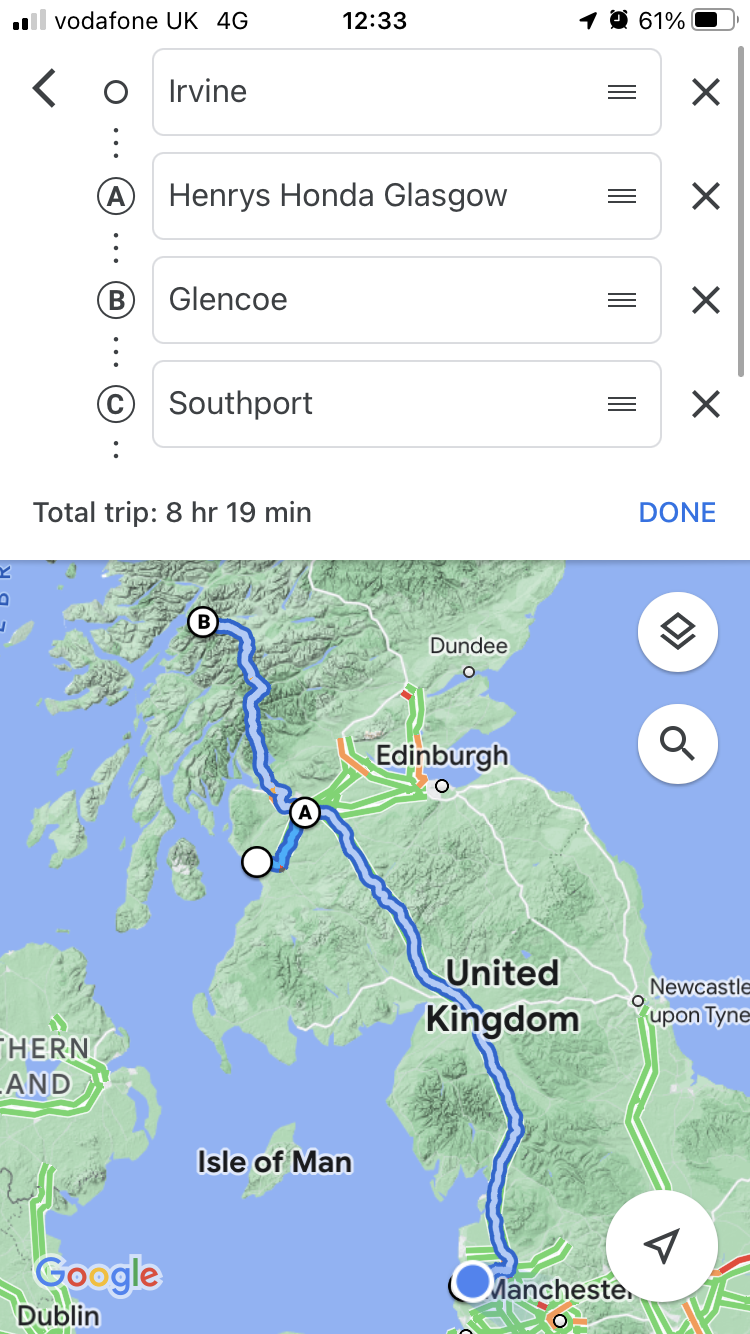 A huge thanks to my mate for saving the day with all the extra driving. Lucky for him the IS250 was comfy as fook. Honda too, can’t fault that. They opened at 9am officially, but they had my cap in hand (heh) and the doors open at 8:30 for me… plus the cap fit, 20+ years apart in design… hats off. It’s just hat puns all night.

The saving grace of the trip, strangely enough… was the roads that absofuckinglutely destroyed my car prior to me forgetting an oil cap. My exhaust was barely hanging on, so I was taking it really really easy the whole time after that. That northwest coastal road is harsh!! Even after the oil cap was left off for 30-40 miles, the oil level was still above the minimum. What I had assumed was valve damage at that point, was infact just the baffles in the central silencer which have been crushed to fuck. 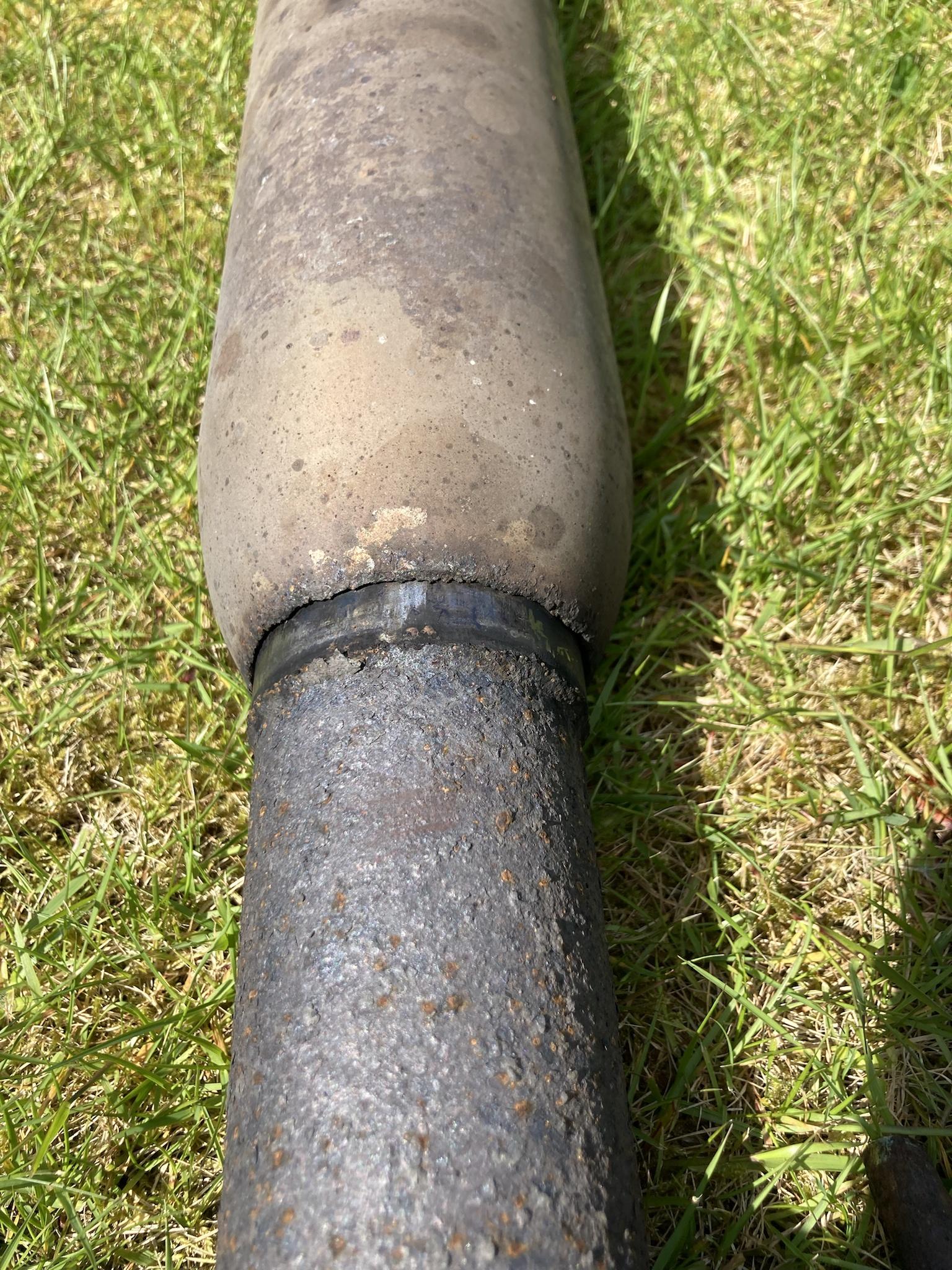 Huge relief today tbh. Stevie is re-doing the set up today, apparently it had flat 0 for camber and toe all around. Getting it raised up 15-20mm too.

So all in all a great first half of the trip, really enjoyed it. Car destroyed at 2/3rds point and the the end of the trip was just a stressful mess of my own doing. Happy the car isn’t too bad and the centre section of the exhaust plus the manifold were both fairly toasted anyway. Spoon B-pipe on the way. Can’t believe they still make them. 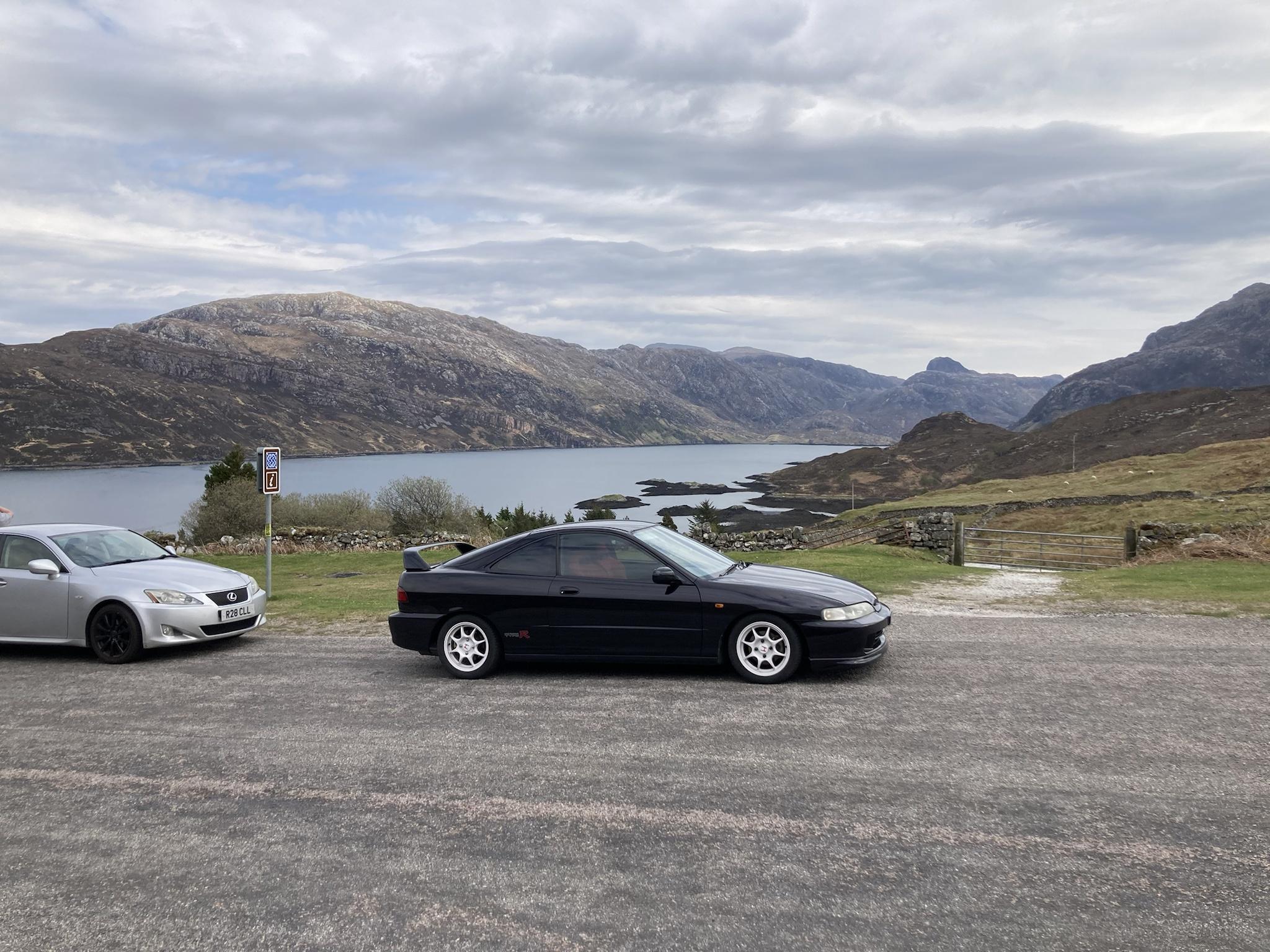 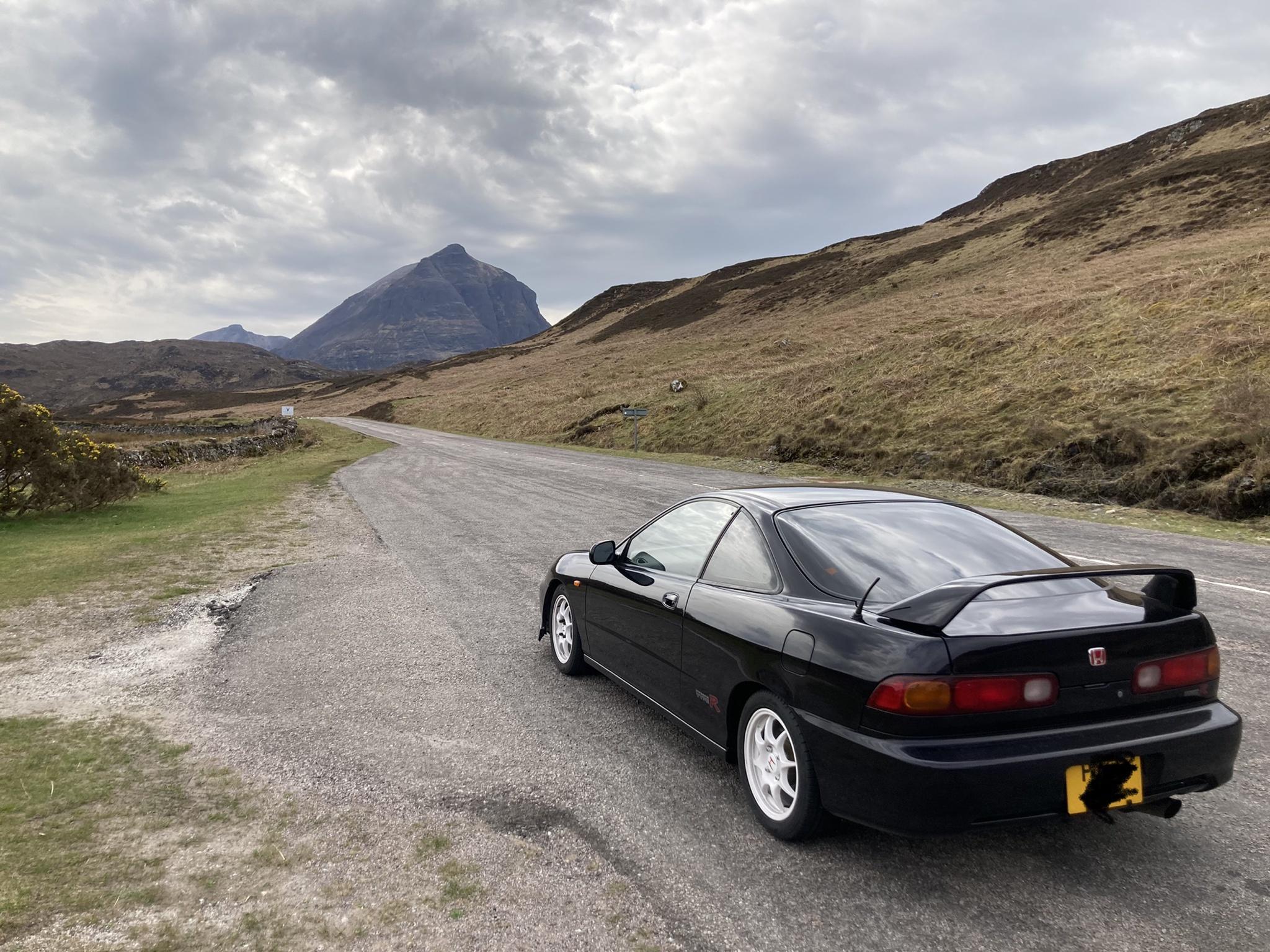 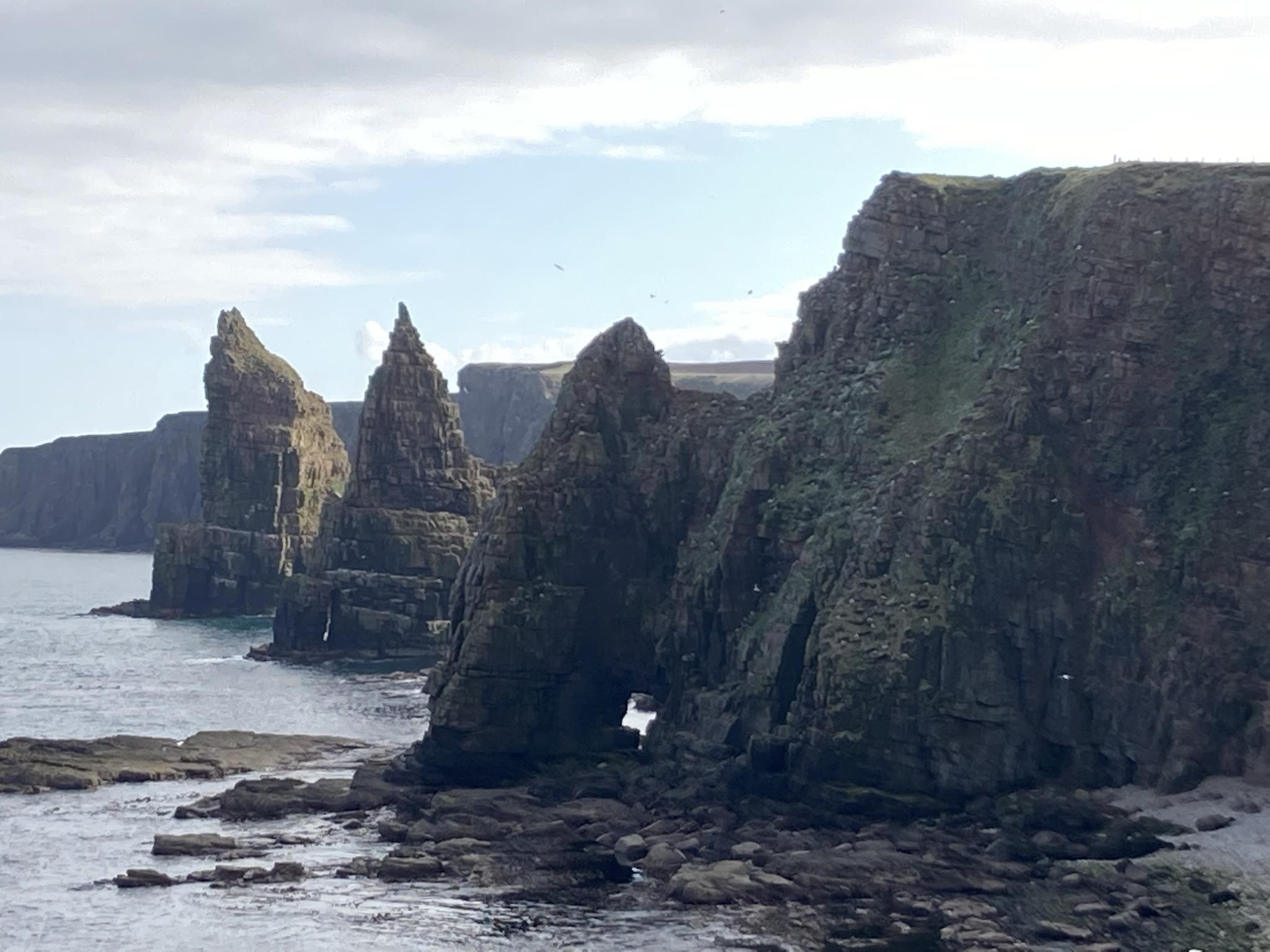 Integra looking good. Paint the H. could use the pin end of a touch up pen

H is painted in gloss enamel not the best, but better than my 1st attempt. The trouble is, when I remove the paint it reveals an undercoat of red, so I have to be very gentle. I’m considering fully stripping it with chemicals and repainting with careful masking but it’s a big job for a small reward.

Well, that is certainly what some would call... Er... 'Memorable'.

What is it with Honda's and oil caps?

Got all excited yesterday when DPD said your package is due tomorrow. Spent a couple hours under the car with impact gun and angle grinder... centre section is snapped in half, thankfully it's quite a long overlap in pipes so it didn't completely collapse. I had a 50/50 OEM/DC sports b-pipe, it's the OEM section with the resonator that's smashed. DC section is actually intact.